Selling Your Association’s Product on the Time Continuum

Your association offers a full menu of products designed to attract the advertising and exhibit space of your industry’s suppliers. And, if yours is like many other associations, you sell each of these as separate products, perhaps, you even use different sales staff to sell them. If you think this model is working, think again, because the customers that you sell to want more value than your current structure delivers—and they are getting it from your competitors.

Think of your customers’ needs as being on a time continuum and you have products which are able to meet those specific time-driven goals. Let’s look at an example. A medium size association offers advertising on a number of its products as well as exhibit space at its face-to-face events. Its website is updated daily, it sends out an e-newsletter every Friday, publishes a monthly print magazine and holds an annual convention with exhibits. In reality, what this association has to offer is a variety of combinations of ways that an industry supplier can reach the market represented by the association or professional society.

Rather than selling individual products, your sales staff should be selling the full array of products as a single solution that spans the time continuum. The advertiser can reach the market daily or on a specific day with a web ad, weekly through the e-newsletter, monthly with a print ad, or annually as an exhibitor at the convention. Working with his salesperson, the client can develop a customized marketing strategy for how and when it delivers its message to your association’s membership.

There are many possible permutations of this approach. For instance, an advertiser is planning to announce the launch of a new product tomorrow. He wants to advertise it, but doesn’t want to wait a month until the next issue of your magazine is published, and he doesn’t want his competitors learning about the new product until after it is released. The solution: he should purchase an ad on your organization’s website today, so the market will hear about it tomorrow. As news of the product reaches the customers, he should schedule an ad in the next available issue of your e-newsletter that will not only describe the new product, but also drive traffic to the special area of the company’s website designed to promote it. Finally, once established, he should plan on demonstrating the product as an exhibitor at your next event. The result: this customer’s tactical marketing goals were met through the use of your association’s multiple offerings packaged and sold to him in a way that met his needs.

When you speak to your customers and perspective advertisers, listen to what they are saying. Ask them what the goals are for their advertising and marketing investments and develop a customized and unique plan that meets those goals and expectations. In the end, sales is about delivering value, and by understanding the time continuum of your organization’s offerings, you will be better able to deliver the maximum value being asked of you.

Want to learn more or discuss your advertising sales challenges? Visit us at http://www.adsalesexperts.net/.
Posted by Bob Silverstein at 4:15 PM No comments:

This is the second in a series of postings I will write about the evolution of typesetting and printing technologies as I have experienced them throughout my career. The main focus of this blog is about, and will continue to be, advertising sales and the unique challenges faced by association publishers. But, as I have previously said, developments in pre-press and printing technologies have had direct and equal impacts on both publishers and advertisers. I am fascinated by how far these technologies have evolved over a relatively short period of time. Looking back is healthy because it allows me to appreciate where we are today and where we may possibly be in the future of the publishing business. Please feel free to post a comment or question about anything on this blog.

IBM entered the typesetting market with the introduction of its Selectric Composer. Utilizing a m

odified version of the mechanism of its popular Selectric Typewriter, the Composer was able to set type with proportional spacing in justified columns. Like the Varityper before it, in order to justify a column each line of type had to be typed twice, once to determine the amount of additional space needed between each word and then a second time to add the required space to produce a justified line of type.

But, IBM took the technology one step further by connecting the Composer to a magnetic tape driven device which allowed the operator to enter text once on a standard Selectric typewriter, have those keystrokes captured and stored on a magnetic tape cartridge, and t 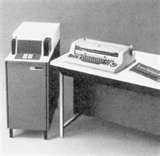 hen played back as justified columns of type on the Composer, which was connected to the tape reading device. The system, called the MTSC, Magnetic Tape Selectric Composer, was a major advance in cold type technology. It offered a number of type styles and sizes, each molded onto IBM’s “golf ball” element. In order to go from Roman to Italic, for instance, the operator had to simply change the element and type the needed words in Italic, then change the element again to return to Roman. For automated playback, “stop” codes were embedded into the text and recorded on the tape which allowed the operator to change elements at the appropriate place as the document played out. Typos were corrected directly onto the magnetic tape before final playback, as well. This technology was the precursor to what we now call “word processing.”

In order to achieve the look of proportional spacing, each character was assigned a number of “units.” Wide characters, such as the letter “M”, were given more units, and narrow characters, such as the letter “I”, were given fewer. The width of each column was determined in picas and the system came with a chart that converted those picas into “units.” The number of units of each line of an article was entered onto the magnetic tape and the internal computer calculated the amount of additional units required between words in order to produce a justified column of type.

The system produced sharp, clean type, and was faster and more efficient than was the Varityper, but it was also limited to the size and typestyles available. Only a few typestyles were available on the “golf balls” and the type ranged in size between 8 and 12 point. It was because of these limitations that the MTSC system was displaced by the next generation of cold typesetting systems: phototypesetting. Companies including Addressograph-Multigraph (AM) and Compugraphic aggressively entered the market with faster, more flexible systems that offered a wider range of type styles and sizes than were ever offered by their predecessors. More on phototypesetting next week.

What are your earliest memories of typesetting systems? Join the conversation here or visit us at http://www.AdSalesExperts.net/.
Posted by Bob Silverstein at 7:28 AM No comments:

Bob Silverstein
Olney, MD, United States
With over 25 years of experience in the sale of print and web advertising for both association and commercial publishers, this blog is the place where I share my tips, views, and perspectives on issues facing the association communications industry today. Please participate and feel free to ask questions or raise issues that are most important to you.